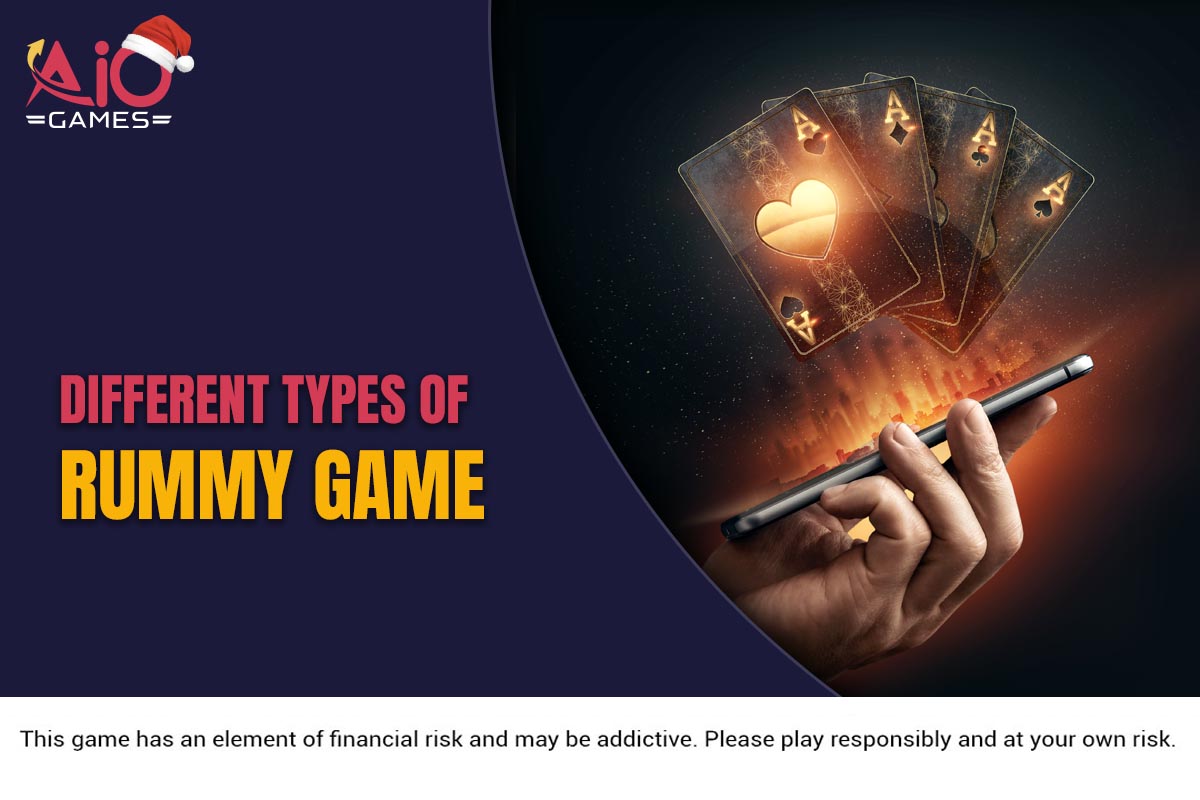 For generations, Rummy has remained one of India’s most favourite card games. This popular card game is still enjoyed and played across homes in India.

Rummy was mostly played at homes with family and friends but ever since the introduction of e-gaming, it can now be enjoyed from any corner of the world with just a mobile phone, or a tablet required.

Moreover, Rummy has evolved itself too with many variations now introduced in the market. With the rules remaining the same for Rummy, in the current scheme of things, one can enjoy & play Rummy in many ways especially with peers and family.

Below we mention the types of Rummy that are available online for gamers. Rummy’s popularity has soared, and one can enjoy and win real money on AIO Games.

There are many different types of rummy that fall under this category. What makes Indian Rummy unique is that is also a part of 13 Card Rummy & its rules are set on making the apt sets & sequences right prior to your opponent’s turn.

Any player who finishes his/her set will need to make a legitimate pronouncement to be termed as the champion.

In this type of Rummy, each player deals with 13 cards & with at least one pure sequence and one impure sequence. The various Rummy variants fall under 13 Card Rummy and is one of the most popular Rummy games in India.

Under 13 Card Rummy, here are its different variations –

In Points Rummy, players will have to play for points after prearranging the rupee variant.

For a player to win Points Rummy, he/she will have to declare and get a score of 0 whereas for a loser, they will have to calculate the remaining points that are assembled in non-sets and that score will be added.

The winner will win the cash which is based on opponents’ total points.

In this type of Rummy, which another variant of 13 Card Rummy & Indian Rummy, a player gets to deal with a fixed number of cards. As the game starts, all players are handed a fixed amount of chips to play with.

At the end of each round, a winner will win chips based on the scores from a losing player. A player with the higher amount of chips wins the Deals Rummy.

Here’s another variant of Rummy that is mostly available on mobile apps and tablets as people love to play Online Rummy. Pool Rummy is a rounds-based game, and its gameplay is similar to that of Points Rummy.

In Pool Rummy, the game is played until the player scores over 101 or 201 points. Pool Rummy takes a bit longer time to finish as compared to the rest as in the former, the winning player of each round gets 0 points.

In 21 Card Rummy, the rules are the same as for every other Rummy game. The only difference here is that in 21 Card Rummy, players are to deal with 21 cards and make 3 pure sequences.

That’s the reason why 21 Card Rummy is one of the most difficult card games.

Also, in 21 Card Rummy, if one drops out before playing the hand, then he/she is in line to receive a 30-point penalty! And any drop after playing, then there’s a 75-point penalty.

The use of Jokers here gives 21 Card Rummy a unique outcome. Here, there are upper and lower jokers assigned & if the cut-joker is 4 of spades, then the upper joker is 5 of spades and the lower joker is 3 of spades.

In 21 Card Rummy, the upper and lower jokers could also be used as substitutes to form an impure sequence.

This is another variant of Rummy which warrants at least 2-4 players. As compared to the rest, in Gin Rummy, the players have to deal with 10 cards instead of 13 to make sets and sequences.

A difference maker in Gin Rummy is that ‘A card’ is to be considered as the first card followed by 2 & 3. Whilst playing Gin Rummy, a player can win without having a full set of cards.

Contract Rummy is just an additional types of Rummy game that is formed out of Gin Rummy.

As compared to Gin Rummy, Contract Rummy involves seven rounds and each round warrants a player to collect a mixture of card sequences.

The first four rounds are to be dealt with 10 cards and 12 cards in the final three. As one plays along, it gets more harder and harder to play.

Originally from Spain, Canasta Rummy has the same set of rules as a routine game of Rummy but here the Joker and 2s are classified as wild cards.

Rummikubh is a blend between Rummy and Mahjong. This Rummy variant is very popular amongst folks in Asia & Europe.

In this game, there are 104 tiles (as similar to 2 decks of cards) with numbers marked between 1-13.

Every player will have to deal with 14 tiles & then have to make sets & lay down their tiles.

In this type of Rummy variant, the players must trade with seven cards instead of the given 10. Here, the players can use Jokers to make impure sets and sequences.

Kalooki Rummy has been originated from Jamaica, West Indies and here the player has to deal with 9 cards and the one with the lowest score is proclaimed as winner.

One of the popular Rummy games especially in America, 500 Rummy is best enjoyed with 2-8 Players. Also termed as Pinochle, this Rummy variant’s rules are very similar to the old age Rummy game.

However, here the players are rewarded points as per their victory and the one to reach the pinnacle of 500, wins the game.

This types of Rummy is very similar to Contract Rummy and here the player is dealt with 11 cards. This game is best enjoyed between 3-5 players.

One of the easiest of the lot, Dummy Rummy can be played with several different combinations.

With many Rummy related apps available online, what makes you choose AIO Games? The answer is – to enjoy playing Online Rummy and try out your skills with the absolute best in the business.

Moreover, as you play along, you are also bound to win real cash and exciting rewards.

AIO Games is home to India’s best ever skill-based games that has the likes of Online Rummy and Call Break.

A simple UI experience and a hassle-free withdrawal process, AIO Games is your go to app! Not to forget, we also provide 24×7 Customer support.

Why Call Break Is The Best Alternative Over Rummy or Poker