5 Mistakes One Should Avoid While Playing Call Break Card Game 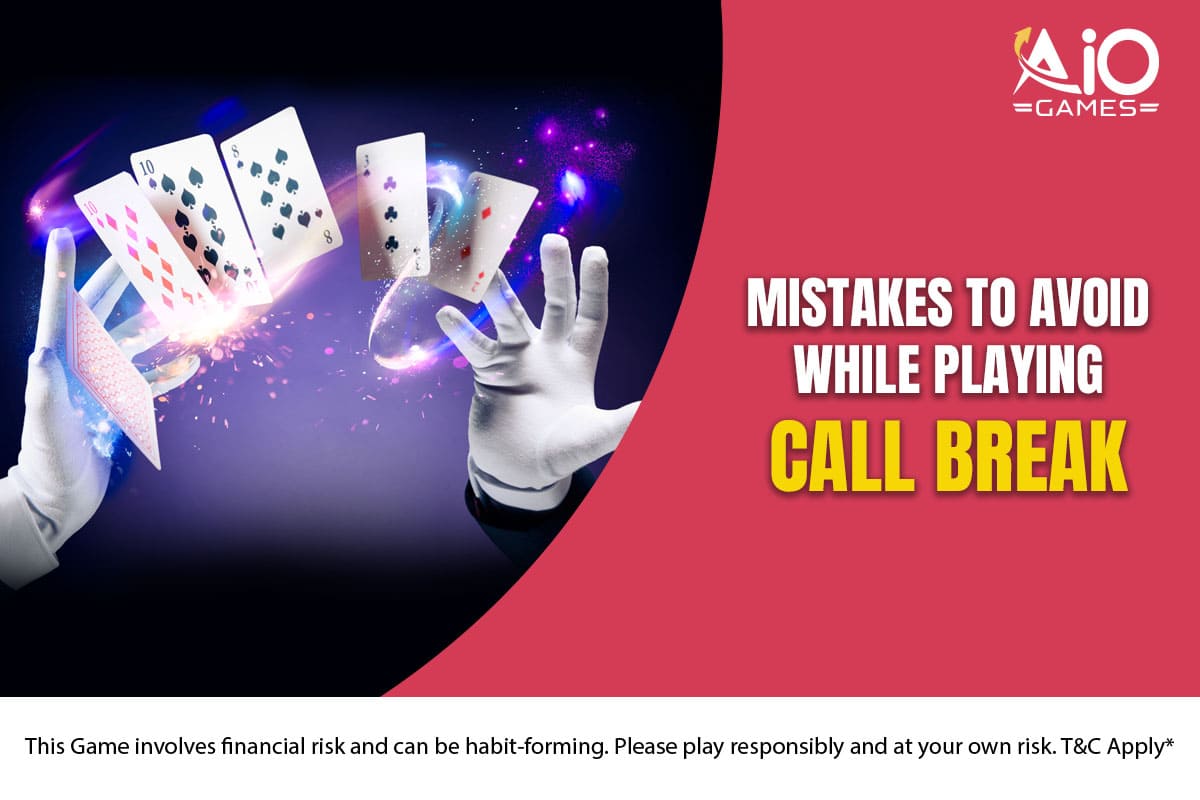 Online games have experienced a vast growth in prominence of late. You can find a plethora of options, be it vintage or modern games, to help keep monotony at bay.

What’s more, you can play them for actual cash prizes. One of the most popular branches among them is card games.

Online card games, in their near practical form, make for a visual treat and do not require an actual human to manage the proceedings.

Registering on these sites is fairly simple with some of them even offering registration bonus to get players started.

Though not as popular as other card games, Call Break acts as a great source of refreshment making itself hard to miss.

The game involves four players and 13 cards split among them each. It is also highly strategic and has the ability to keep players on the edge of their seat at all times.

It is imperative that you abide by its rules, as blunders in basics can lead to mistakes and mistakes in Call Break have consequences.

You will come across many versions of the game on the Internet; so, make sure to choose a source that is reliable and offers in-depth guidelines for its players to follow.

If you are not familiar with the rules of Call Break, the entire fun element may feel misplaced.

It is much different than other card games like rummy or poker. Once you are acquainted with its rules, see to it that you play the game a few times to get a hang of it and after you feel so, start competing with other online players.

Since the game is unique, there is a possibility of making several mistakes.

However, you should try your best to avoid the below mentioned mistakes while playing call break –

1. Not Knowing the Rules

If you are new to Call Break, make sure that you know the basic rules. If you are in it to “try my luck”, you cannot win.

Thinking of it as just another card game will backfire. There are bids and tricks involved, even seating arrangement matters, as the game is played in the anti-clock direction.

Understand the power of the spade suit so that you can rank higher than other players. Most importantly, you ought to know when to play a spade card and when not to play it.

Once you get a gist of the rules, practice and that will make you a winner eventually.

As mentioned previously, Call Break involves a lot of risks, meaning one wrong move can cost you points.

Understand the 13 cards that you have and analyse what you can do with them. It will help you determine how many tricks you can perform whether or not you can take risks at a given point in the game.

Each round decides a winner and by being cautious with risk-taking, you can win the maximum number of rounds.

3. Not Pre-empting the Moves of Other Players

Call Break requires you to be vigilant at all times. It helps you to pre-empt the moves that others individuals might play, which decides your place in the game.

If you can intercept the thoughts of a player, you can destablise them.

In case you start with a certain suit, say a club, and the next person plays a diamond, it becomes evident that they do not have cards belonging to the club suit.

By being aware and predicting the next moves of your adversaries, you can easily trump them.

4. Being Unclear about the Bidding Process and Point System

One of the aspects that pushes individuals away from the game is failing to understand its bidding process and the points system.

Basically, the bids regulate how much points the players earn, which makes placing bids a crucial feature in the game.

The game will take into account the points scored by every player and the one with the most points wins.

Complacency is another mannerism that can spell doom for you. Once you have mastered the game, it is crucial that you assess the situation before making brash decisions.

See to it that you understand that wrong decisions in competitions have consequences.

If you manage to avoid the above highlighted mistakes, winning almost every time is a given.

Find the right source to play Call Break Cash game and get going!

5 Tips One Can Use to Trump Others at Call Break

A Guide On How To Win Huge Cash In Fantasy Cricket